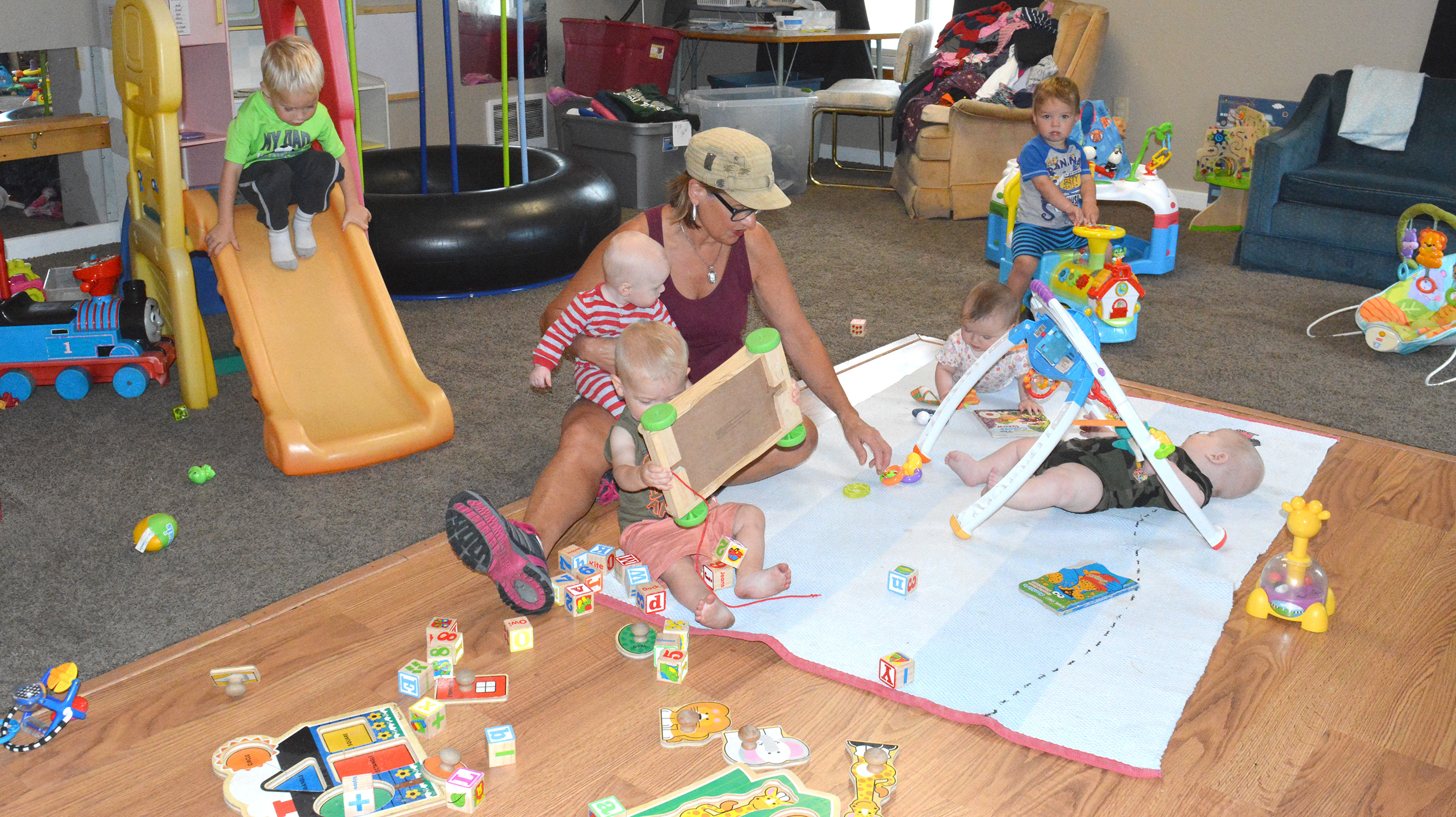 For 37 years Anita Fettig has been the go-to for child care in Napoleon. From dawn until after dark each day she bounces between the care centers and the consignment shop she owns, which sits as an anchor in between the few city blocks where they are located.

Fettig runs four day care facilities which serve around 90 children, accounting for full-time, drop-in and after-school care. Managing that many children in four separate facilities near her home at all hours of the day, calls for extreme flexibility.

“That’s why I love it because I can live and work like that, but not everyone can,” she said. “We have a very unique and wonderful situation, like one big family, and it could all be gone tomorrow. We all know that too.”

Like in most child care providers in North Dakota, Fettig faces challenges recruiting, retaining and paying employees a competitive wage. Without the day care, there would be many sad families in this small community of about 800 people, Fettig said, seated in a back room of her shop.

“There may be a need for more day care in the future in this community,” Fettig said, pointing out that the community has recently been growing again. “There is only ours and one other committed gal that will probably be retiring soon.”

It is a similar tale across many rural parts of the state, where most counties rely on a mix of small licensed home care catering to a handful of children, group care in a home or facility, or if they’re lucky, a larger child care center. Profits are minimal at best.

Pandemic disruptions hit many child care providers hard, particularly in far-flung corners of the state. Enrollment dropped by one-third during Covid restrictions, according to state data. This led to closings, staff layoffs and reduced income for providers.

U.S. Census Bureau and Department of Human Services (DHS) estimates show there are nearly 55,000 children under the age of 5 in North Dakota and around 30,000 children in licensed child care.

For the most part, licensed child care demand far outstrips capacity. In North Dakota, Nelson and Cass counties have the highest capacity, yet both only meet 55 percent of the potential demand.

Most others meet only 25 to 35 percent. Slope County in the southwest part of the state, has no licensed child care at all, while Sioux has none outside of what is provided by the Standing Rock Sioux Tribe.

According to North Dakota DHS data from 2021, Logan County had a licensed child care supply of 119, with Fettig’s operation taking up most of that share.

In Hazen, in the heart of coal country, the situation is more pressing. Surrounding Mercer County is short hundreds of slots to handle the 615 children under age 5.

New Bethel is the only licensed center in a county of about 8,300 people.

Santini said one major issue is the ability to retain staff, even with higher pay rates than many providers, simply because the center cannot supply benefits. Employees are lured away by jobs that pay the same or more, benefits included. It is hard to compete.

“It has become more and more difficult to retain staff to be able to keep more children, so this has led to an enrollment freeze,” Santini said in the office at the former church.

Like with most centers, homes and group care, freezes have led to long waiting lists for parents hoping to get their kids enrolled.

Difficulty in recruitment and retention is a reality in every North Dakota town without sufficient day care capacity.

For Mercer County, a desperate situation could have been worse. Attracting and retaining workers with young families to the area wouldn’t have been possible without the kind of capacity the New Bethel center was able to provide when it was established in 2017.

In 2016 a series of retirements among longtime power plant workers led to a recruiting drive and serious retention issues, with a major part of that being the lack of child care in the area, said Erin Laverdure, who leads community relations at Basin Electric Power Cooperative.

“Prospective employees were maybe interested in coming, but if they didn’t have care for their two or three kids, it wasn’t a sustainable solution,” Laverdure said.

Since those problems were also being felt by other companies in the area, eight companies including Basin Electric Power Cooperative, cobbled together startup funding to secure a property, hire staff and get New Bethel operating.

If they had not found a solution, the community would have continued to wither as workers and families moved away.

Fettig said people are increasingly moving back to or staying in Napoleon and starting families, necessitating the need for future planning.

A total of $117 million in COVID-19 relief funding in the form of federal stabilization grants provided by the state over the past year has helped keep providers afloat, but those funds are close to ending.

Working families seeking assistance to cover child care costs have been helped with increases in household income limits, but that isn’t helping everyone.  The number of available slots continues to dwindle.

“We are running at a very bare minimum of staffing right now,” Santini said. “I’ve actually had to just give notice to several families that we’re not going to be able to care for their kids anymore.”

Prior to the pandemic, New Bethel had an enrollment in the mid-80s. This dropped to the low 60s over the past two years. As of Aug. 15, the center had to go down to 55 children.

The numbers could look even worse once the full accounting is done for 2022, said Verla Jung, supervisor of consultation services at the nonprofit group Child Care Aware.

“Because of COVID people couldn’t stay open,” she said over coffee. “Recently there have been grants to help providers, but they’re all going to come to a stop here pretty soon. The big fear is what’s going to happen when we jump off that cliff?”

Gov. Doug Burgum and other state officials met with child care providers in June, and are expected to unveil new policy and budget proposals during the 2023 legislative session. The governor’s office did not respond to a request for more information about the new measures.

On Aug. 11, the DHS announced a policy to help licensed child care providers retain workers, with qualifying individuals able to access funds ranging from $150-$600 per quarter, depending on the number of hours worked.

When broken down when compared to hourly wages, the funding only provides around an extra $0.29 to as much as $1.15 per hour on the higher end, still below wages at fast food restaurants and without added benefits.

“They need some kind of subsidy to cope with the cost of care,” Jung said.

Pay at New Bethel is between $13 to $15, which is somewhat competitive until the lack of benefits are factored in. On the parent-consumer side, tuition rates are kept lower through the cooperative system to help workers from member companies cover child care costs.

“In North Dakota you can go to fast food or Walmart and make $18 an hour and get benefits, sick time, health insurance, and smaller operations aren’t able to offer benefits,” Jung said. “So that really hurts your chances.”

Professionalizing the child care system, with higher pay levels, more training, benefits and insurance could make a difference, so long as it doesn’t transfer cost to families already struggling with high inflation.

Getting more respect for the work they do is also a common refrain heard from those working in child care.

“I have done this for 25 years and I’ve always felt a definite lack of respect for the profession,” Santini said. “Especially in North Dakota where we don’t have legislation about education and requirements for center teachers, you just basically have to have a high school diploma and take 15 hours of training.”

In Santini’s view, “Education is the piece that is missing to help continue to move it forward and professionalize it.”

Fettig, too, sees a lack of proper training and mentoring as one of the biggest challenges to quality day care in the state.

“If I could retire and now, and say, get paid for being a mentor to day care providers, that would be an ideal job with what I could share,” Fettig said. “You need to give people training, and it needs to be on-the-job training.”