A question looming in the minds of those coming to North Dakota, however, is whether they are wanted or not. In the case of refugees, most do not have a choice in where they end up.

After years of steady arrivals of legal immigrants, resettled refugees and temporary workers to North Dakota, numbers dramatically declined under recent federal immigration tightening, pandemic travel restrictions, and the closing of Lutheran Social Services [LSS] - a nonprofit group that had long facilitated refugee resettlement for the state.  The perception is the state may not be as welcoming as it once was.

That rapid decline has left businesses in a lurch during a time of historically low unemployment and intense competition for labor both locally and nationally.

Employers in Burleigh County, for example, now have nearly 3,400 open positions to fill, according to Brian Ritter, President & CEO of the Bismarck-Mandan Chamber, up by around 400 from the year before, and are looking at all options.

“Utilizing legal immigrant labor is not necessarily a new phenomenon,” Ritter said at an interview in his Bismarck offices. “I think now what you’re seeing simply is the broader business community having to consider utilizing this labor for the first time.”

For Ritter, that has included inquiries from smaller contractors, service companies and health care providers that may have never used visa or immigration programs to ask how they can work with the federal government to fill workforce needs.

“I think more employers are opening their eyes and considering that, some for the first time,” he said.

Between 2007 and 2021, official refugee resettlement numbers in North Dakota went from a high of 563 in 2014 to a low of 19 in 2021, according to data provided by the North Dakota Department of Human Services following an information request.

The most recent settlement has been confined to the Fargo area. Under that program, in 2021 no refugees were resettled in the Bismarck area, and just one settled in Grand Forks

Due to the closing of LSS’s North Dakota offices, no other official refugee resettlement program existed outside of Fargo since last year, where Lutheran Immigration and Refugee Service [LIRS] was able to step in to facilitate there.

“I tell people that no one enters the United States with more vetting than a refugee,” Daniel Hannaher, Field Office Director for LIRS.

“When it was first publicized that we were going to be receiving 49 Afghans, I had a call from one of our good employers who said I'll take them all,” Hannaher said. “He virtually didn't take them all, but he sure took a lot of them. We get calls on a weekly basis from employers looking for help.”

With Grand Forks County’s current unemployment rate hovering around 1.8 percent, similar needs are there. Had refugee resettlement continued at the rate before 2017, estimates are that around 500 more people would have been added to the community, according to the data showing an average of 100 resettlements per year before 2017.

“That would have been a one percent population growth for the City of Grand Forks,” Becca Cruger, Director of Workforce Development at the Grand Forks Economic Development Corporation. “[That’s] a growth of people who pay taxes, buy houses, keep companies running, and fill our schools.”

In 2019, Burleigh County nearly became the first locality in the country to block refugees under a Trump administration executive order that required states and local governments to give written consent for resettlement.

While the 3-2 vote in December that year ended up in favor of keeping resettlement, the debate still leaves a chilly memory for some.

Ranju Dhunghana, a Bhutanese who spent most of the first 11 years of her life in a refugee camp in Nepal before being relocated to Grand Forks in 2009, hardly felt any anti-immigrant sentiment until that time.

“That’s when I learned there were so many negative comments about refugees,” she said. “I still feel like there’s negativity toward refugees. Sometimes when I look at Facebook, any time a person of color does anything wrong you can see hundreds of negative comments, like send them back to their country or stuff like that.”

Now a University of North Dakota graduate working in the health care system as an interpreter and nursing assistant, Dhunghana recently took her medical school entrance test in hopes of further advancing her medical career.

Instead of hearing individual stories of success like Dhunghana’s, many see nameless, faceless numbers and misconceptions about what assistance refugees and other immigrants get once they’re here.

Cynthia Shabb, executive director of Global Friends Coalition, which provides services to refugees and immigrants in Grand Forks, said the lack of acceptance stems from a variety of misperceptions.

“I think the [Mexico] border situation has exacerbated the problem,” Shabb said. “People have this perception that people are flooding in. [For example], we are working with a family who's filing asylum and when you file asylum, you have no benefits given to you at all. And that is really difficult.”

Educating the wider public about the experiences of refugees and immigrants who have come to North Dakota could help change some perceptions, said Ivona Todorovic.

That’s from someone who has gone from being a refugee from the war in Bosnia, to settling in Grand Forks in 1995, to recently being named one of four finalists for the 2023 North Dakota Teacher of the Year Award.

To help relay the personal experiences of her students to the rest of the student body, Todorovic, who currently teaches in the English Language Learner (ELL) program at Red River High School, develops projects such as assigning seniors to interview those in her program, turning their scattered experiences into stories with common threads.

“To be honest with you, I embrace Grand Forks, it's my home and I lived here longer than I lived in Bosnia,” she said. “But I never planned to come here, we just lost everything, you know, we had, so that's the thing. The war happened. And I’d say, for about 75 percent of my kids [in the ELL program], it’s the same or a similar thing that happened.”

For Wendy Sanderson, director of the English learners program at Bismarck Public Schools where 85 languages are spoken by families within the district, the debate over refugees a few short years ago was a tough pill to swallow from her vantage point of watching families integrate into the community.

“It was really hard for me, because I didn't realize Bismarck was like that,” she said in an interview at her office. “I grew up here, and I didn't really see that those kinds of attitudes were here.”

Among the biggest needs for new immigrants, she said, is having someone that can advocate for them and make them feel welcome.

“Are we reaching out and loving up these families, and doing whatever we can to make their time in Bismarck - whether they want to stay here or whether they don't - to make it something that is good for them, not only academically, but emotionally, and socially? I think these are the things that have been my focus while I've been here in Bismarck schools, trying to figure it out.”

While full data isn’t yet available for 2022, Uniting for Ukraine, a separate program managed by the Department for Homeland Security has been increasing the numbers of immigrants from the war-ravaged nation in recent months, said Holly Triska-Dally, state refugee coordinator. Relocation has mainly been to the Fargo, Bismarck, and Dickinson areas, she said.

“This year has been a big shift,” she said. “It's a little tricky to say, but I think there's definitely been a pretty significant geographic expansion of resettlement through the Uniting for Ukraine [program].”

Just in Bismarck, at least 59 applications have been submitted and approved for sponsors to host refugees from Ukraine. Triska-Dally said those numbers could increase to around 100 in the coming months, providing a rough estimate.

In Bismarck, local group Global Neighbors has been working through Church World Service, one of nine national resettlement agencies, to sponsor Afghan refugee resettlement in the Western half of the state and also assist with Ukrainian resettlement. The group is currently resettling an average of one family per month, according to Julie Ramos-Lagos, executive director at Global Neighbors.

Ramos-Lagos said she has seen increasing interest, especially in smaller towns, to bring in recently settled refugees to fill jobs. Around 60 percent of those being resettled have university degrees or higher-education status, but may lack adequate English skills and degree certifications upon arrival, she said.

“So it's a matter of really just spending the first six months or a year really focusing on getting their English and any kind of certifications, things like that, settled, but a lot of them coming in have a high-level education,” Ramos-Lagos said.

Photo 1:  Fifteen new U.S. citizens say the Pledge of Allegiance after taking the Oath of Allegiance ahead of the Fargo-Moorhead RedHawks game on Tuesday, Aug. 2, 2022, at Newman Outdoor Field in Fargo. Alyssa Goelzer/The Forum

Photo 2: High school students from Grand Forks Public Schools perform a play for World Refugee Day on June 18, 2022 at the Town Square Farmers Market, marking the theme "Whoever. Wherever. Whenever. Everyone has the right to seek safety." Photo credit: Mark Broden, courtesy of the Global Friends Coalition. 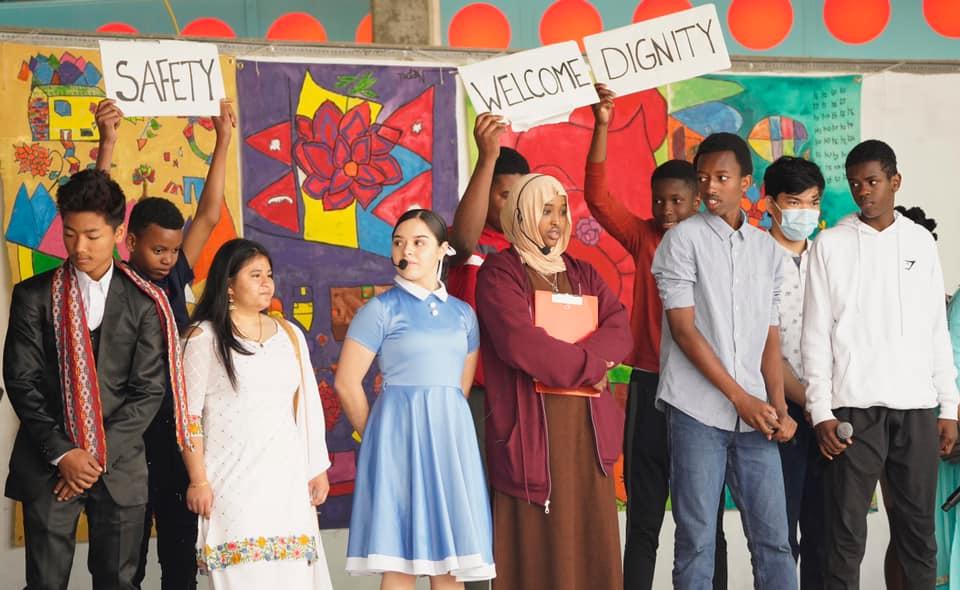 Clarence Sitter, Chief Operating Officer of the Theodore Roosevelt Medora Foundation, which supports the Medora Musical and other visitor activities in the southwest part of the state, said most of the disruptions to the ability to recruit foreign workers have been pandemic-related.

In a normal summer season, the foundation would bring in approximately 140 foreign workers on various work three to six-month visa programs, but overall numbers dropped by two-thirds last year, rebounding to around 80 during this summer season.

"We've recruited really more than we ever have before in terms of domestic workers in the last couple of years," Sitter said. "We've talked to a lot of schools, and invested in a position to specifically recruit employees. We're fighting with everybody for employees, because just about every business is looking for employees these days."

The pandemic has led to a longer-term shift for the foundation, which expects to recruit more domestic workers, particularly through internships and cooperation with universities and other school programs, with recruiting for the following season starting in July instead of December each year, he said.